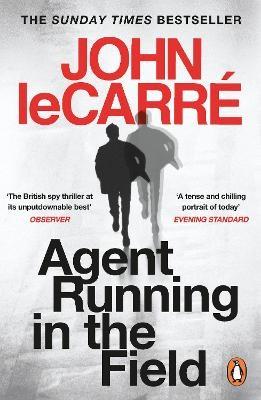 AGENT RUNING IN THE FIELD

'The British spy thriller at its unputdownable best' Observer ________________________________ Nat, a veteran of Britain's Secret Intelligence Service, thinks his years as an agent runner are over. But MI6 have other plans. To tackle the growing threat from Moscow Centre, Nat is put in charge of The Haven, a defunct substation of London General with a rag-tag band of spies. His weekly badminton session with the young, introspective, Brexit-hating Ed, offers respite from the new job. But it is Ed, of all unlikely people, who will take Nat down the path of political anger that will ensnare them all. _______________________________ 'A rich, beautifully written book studded with surprises. Narrative is a black art, and Le Carre is its grandmaster' Spectator 'Blisteringly contemporary' Economist 'Subtle, wry and seamless, it's an utter joy, from first page to last' Daily Mail 'A very classy entertainment about political ideals and deception . . . laced with fury at the senseless vandalism of Brexit and of Trump' Guardian 'A fine piece of storytelling' Times